A rail yard is a complex series of railroad tracks for storing, sorting, or loading/unloading, railroad cars and/or locomotives. Railroad yards have many tracks in parallel for keeping rolling stock stored off the mainline so that they do not obstruct the flow of traffic. Railroad cars are moved around by specially designed yard switchers, a type of locomotive. Cars in a railroad yard may be sorted by numerous categories, including railroad company, loaded or unloaded, destination, car type, or whether they need repairs. Many large yards may have a tower to control operations. 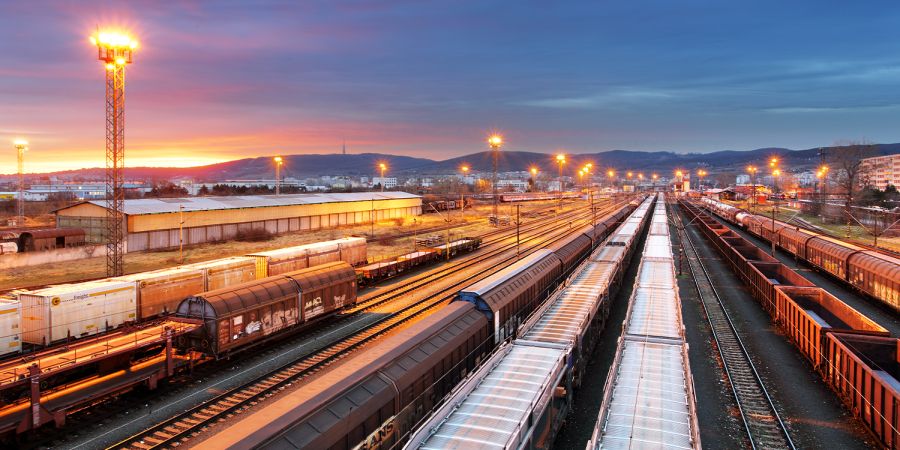 A Flat Yard is a type of Classification Yard where the tracks lead into one main track with many switches at one or both ends of the yard where the cars are pushed to sort them into the right track. There are many medium-sized flat yards in the USA and also some which are quite large such as Settegast Yard in Houston on the UP, the Decatur Yard in Decatur, IL on the BNSF, and the East Joliet Yard in Joliet, IL on the CN.

These are the largest and most effective classification yards with the largest switching capacity – often several thousand cars a day. The heart of these yards is the hump: a lead track on a hill (hump) over which the cars are pushed by the engine. Single cars, or some coupled cars in a block, are uncoupled just before or at the crest of the hump and roll by gravity into their destination tracks.

Also called an arrival yard.  A Receiving Yard is part of a larger rail yard where locomotives are detached from freight cars, cars are inspected for mechanical problems, and cars are blocked before being sent into a classification yard.

A Transload Yard is usually part of a larger rail yard where cars can be transloaded.  It has road access and a special gate so that trucks can get to the rail car to offload the railcar's contents.

A conductor that has been assigned to jobs within a rail yard.  Typically operate inside of large rail yards. 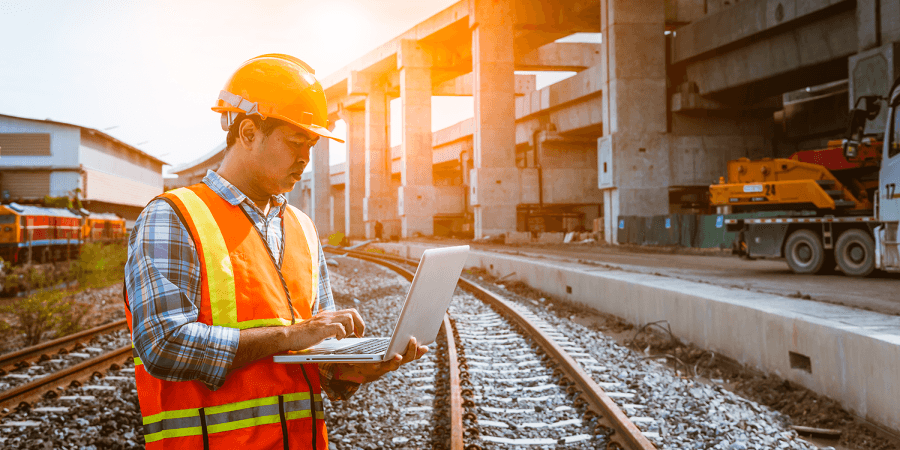 A railroad employee in charge of conductors.  They manage local train operations and make decisions on local train movements.

A railroad employee who is in charge of a rail yard and yard operations.  They are responsible to ensure that rail yards remain fluid and that all jobs within, out of, and into the yard are completed on time every day.

Like an Air Tower at an airport, a Yard Tower is a centralized height advantaged point in a rail yard where the yardmaster and their team members can overlook the yard.  Many Yard Towers are no longer in service as rail operations have changed with modern technology and methods to track railcar movements.

Switchmen work in the rail yard under the direction of a yardmaster. They build trains by switching cars out of storage tracks in the yard into a yard departure track. They also pick up and switch out inbound cars into the yard that are going to be moved locally or placed on a different outbound train.

Originally a brakeman was a member of a railroad train's crew responsible for assisting with train braking. A brakeman's duties also included ensuring that the couplings between cars were properly set, lining switches, and signaling to the train operators while performing switching operations.  The brakemen typically rode in the caboose, the last car in the train. Today trains operate without brakemen.  Brakemen are now responsible for making sure that cars are properly coupled/connected.

A railroad employee who controls the departures of trains according to weather conditions and in the interest of efficient service. Often located in centralized operations centers.

The Main line is track that is used for through trains and is the principal artery of the system from which branch lines, yards, sidings, and spurs are connected. It generally refers to a route between towns or rail yards. For capacity reasons, many Main Lines are double-tracked, and some have 4+ multiple parallel tracks. Main line tracks are typically operated at higher speeds than branch lines and are generally built and maintained to a higher standard than yards and branch lines. 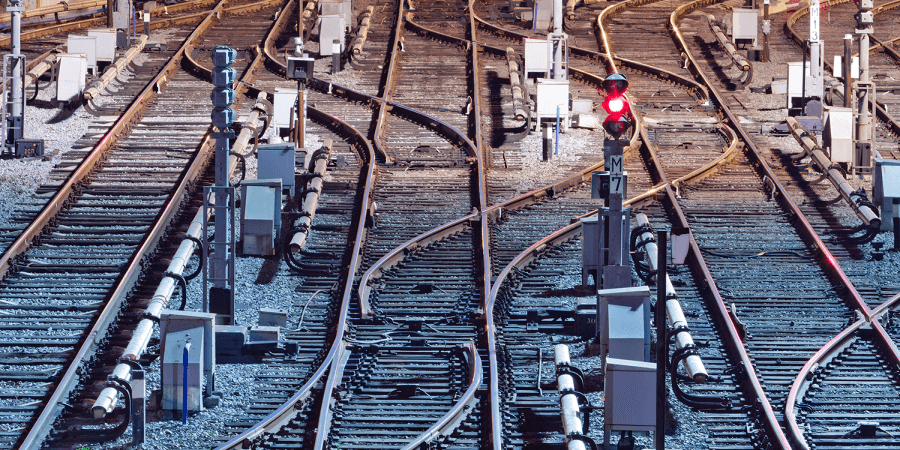 Area/Tracks in the yard where cars are taken for repairs. Specifically, one of the shop tracks will be designated as the RIP (repair in transit) Track where the repairs are actually done.

Many Classification yards also have a Scale Track. It is a track with a scale built into it so that rail cars can be weighed.

Some rail yards and most private customer rail yards have Cleaning tracks/facilities.  This is an area of the yard or certain tracks where the interior of railcars can be cleaned.

There are two common definitions of a Rail Spur. First, a branch line is a secondary railway line which branches off a Main Line. A very short branch line may be called a spur line. Little used branch lines are often spun off from larger railroads to become new common carrier short-line railroads of their own. Throughout the United States and Canada, branch lines serve to link smaller towns or cities located too distant from the Main line to be served efficiently. Second, a Spur is also known as a smaller track within a rail yard usually holding 20 or fewer cars that can only be switched from one end of the track. It is usually used for temporary railcar storage.

A Rail Siding is track off the Main Line to marshal or hold cars on a temporary basis. Sidings are usually not as well maintained as Main Line track.

A track or tracks used for storage within the yard.