Trade "Wins" and Reflections on RailTrends 2019 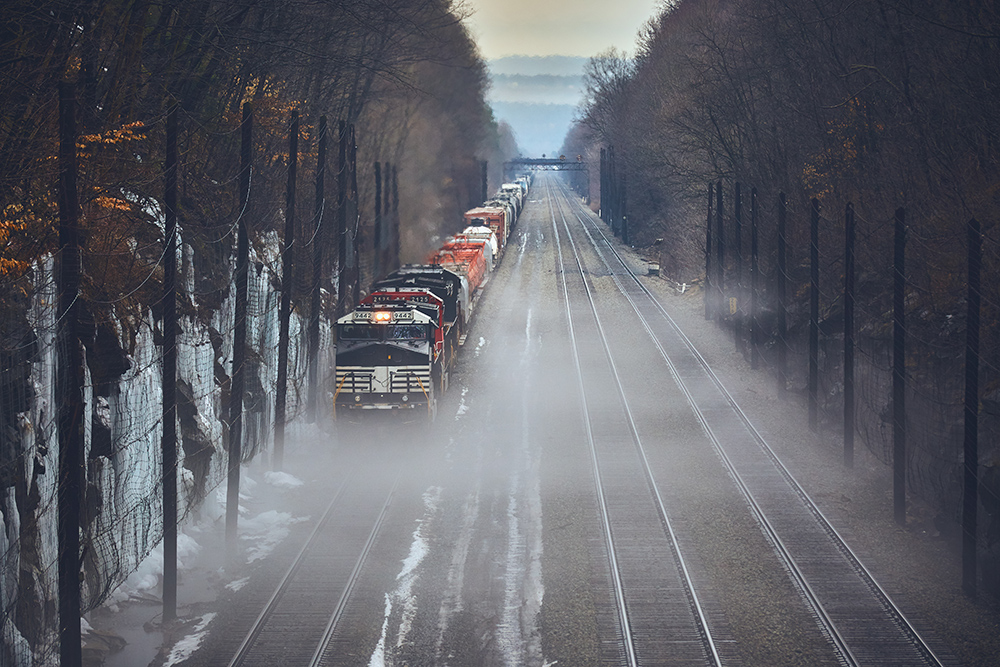 “There is a very good time coming up ahead” /ibid

At last!  Holidays, a side trip to Chicago to give my annual “Sand House Gang/Northwestern University Holiday Luncheon” address, as well as writers’ block and trying to make sense of what is as ever, and purposely, a most eclectic conference has all combined to delay this year’s “RT Reflections”, but it's finally finished.  The overall summary theme, if there was one, was no near term inflection (the current state of the economy and of rail volumes was barely addressed) but preparation for that coming inflection, whenever it is, and future market share battles, is underway; PSR is not anti but rather critical for future growth.  The November issue of RailTrends partner Progressive Railroading magazine featured excellent profiles of two RT speakers, our “Innovator of the Year” Patrick Ottensmeyer, CEO of the KCS, and Barbara Wilson transitioned from rail car leader to short line (RailUSA) CEO.  First, there has been some news that cannot wait until the regular write-up coming this week. 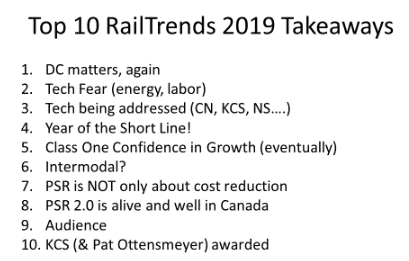 1)      DC matters (again). Of course, it always did and does, but as AAR CEO Ian Jefferies pointed out, the STB is becoming “very, very active” once again, starting with the hearings on assessorial charges, etc (no resolution, but pressure) and continuing to the recent hearings.  STB Vice Chairman Patrick Fuchs was almost scarily eloquent in his speech - although perhaps less open than Chairman Begeman last year due to open cases before the board this year - where he noted in his overall theme of “7 Important Numbers” the number 0 – representing the number of rates cases filed over the last 3 years at the STB.  While I argued that maybe because of the amount of business under contract and thus exempt from the STB’s rather dwindling volume coverage, the STB thinks it is due to the complexity and cost of filing and under-represents what they think might be railroad “market dominance” (I always at this point think back to Hunter’s great quote on use of truckers in his- CSX -  STB hearing in 2017).  He did give the rails good marks (the number: -77% cars on line 2017-present) on PSR progress in 2019.  Ian’s overall response was string, and best summarized by the man himself from his Op/Ed piece from The Hill.

2)      Tech fear was ever-present – in the Q&A and of course in the presentation of my good friend, the evil (kidding) Doctor Doom, Rod Case, head of the Global Rail Practice at Oliver Wyman.  As noted by the estimable Roy Blanchard in his Weekly Review (WIR), Case did offer some good news:  PSR will help the NA rails by lowering their cost (and increasing their competitiveness, adding (cheap) capacity, reducing dwell and increasing reliability.  But then Rod was Rod – and we need Rod to be Rod.  He noted that rails still needed to fully embrace a culture of continuous change (not just continuous cost-cutting).  And, scarily, he posited that the coming changes in energy impact through technology (the reduction in costs for truckers, etc) will be even more impactful than the labor advantage counter-attack from the highway (AKA AV, or “driverless”).  Under his current scenario, without changes in rail, a flattish overall carload outlook to 2045 – despite economic and population growth – would mean an overall share drop from 32% to 27%.  His two examples were incredibly interesting – finished vehicles and grain!  The former is really the first sector of rail share capture in the early days of the “Railroad Renaissance” and the latter is, well, the heartbeat of rail.  Scary indeed….and my fear is that much of the technology shown to the investment community over the past year is operations-focused.  That’s not a bad thing (see Rod-lowering costs, above) but moves like the CN moving the CIO position to report to the COO scare me that the customer-facing technology might get short shrift.  Also on the negative side of the ledger, that “pilot project” between short lines, a major paper shipper and a Class One that I was so excited about ~18 months ago is still….stalled.

3)      Addressing the Tech Fear – On the other hand, CN assures me that my fear is misplaced, and every Class One (and the short lines) talked tech – UNP discussed API, NS it’s “Trackmobile” project (and speaker EVP John Scheib noted that PTC was moving from “unfunded mandate” to the coming “backbone of the virtual railroad” in RT17), etc.  The night before RT, a dinner with KSU Chief Innovation Officer Brian Hancock and Janet Drysdale of the CN – both in the audience at RT19 (see below) - was most reassuring.  Both carriers are at the very top of the rail tech game, and both are looking at a new, more modern PTC (called “ETC” in Canada) for the two NAFTA countries not covered by the US law to install their own system-wide digital backbones.  We also heard about an imminent carrier-led industry initiative to get all rail equipment tagged and visible, perhaps within half a decade from approval!  Finally, Wabtec CEO Rafael Santana was incredibly impressive in describing the efforts to counter the Bad Doctor’s warnings about energy/fuel competitiveness for rails starting with a battery conversion of the existing fleet (being tested on the BNSF next year) as well as discussing their ongoing efforts to make themselves more productive.

4)      The Year of the Short Line – deals, deals, deals (at RT it was announced that the CP had bought the CMQ, the Fortress-rescued line in the Canadian/US east that the CP itself spun off years back– for, it was said, some 10 times what Fortress paid for it).  Our traveling circus panel first started at the ASLRRA Convention in 2017, has grown – in addition to the CCO/CMO of GWR, Watco, Pan Am, Anacostia & Pacific, RJ Corman we welcomed newcomer RailUSA.  I think I can make a case, as I have done since we put this band together, that these could well be the smartest folks in the room, even if one of them is my college classmate….The noted that the valuation boom was an issue, not even a double-edged sword for them (excepting, perhaps, GWR, about to “make it rain”).  Eric Jakubowski of Anacostia (Harvard ’82) thinks that there will be more supply from the Class Ones to come, beyond and including CSX – as lower density segment sales “is the next natural step” after PSR.  Among the panel highlights:

5)      The Class Ones wisely looked beyond the current slump to the future – and they see PSR not (just) as a cost-cutting tool but primarily as a growth driver.  Now, this viewpoint might have been colored by the fact that we had two CEOs who were CMOs, 3 current CMOs, and a Head of Strategy as the C1 representatives – but that is also why they were chosen!  In chronological order:

6)      Will rails gain their intermodal mojo in 2020?  (the following paragraph is from my contribution to the upcoming “Journal of Commerce” Annual Yearly Preview for 2020)

Well, they had better; intermodal remains the best opportunity for rail to show secular as well as cyclical growth, and to participate in the new economy.  Certainly, after the tough year of 2019, it will certainly look (somewhat) better, not just due to comparisons but reduced “de-marketing” under the new PSR operating plans.  The big macro questions, the ones the rails cannot control, remain – the state of the economy and, particularly, the status of trade wars; in addition trucking overcapacity may be coming down but isn’t over.  So what’s a railroad to do?  It is certainly easy to see what they should have done – provide more reliability and capacity last year (2018) – which will go down as one of the biggest “missed opportunities” of all time.  By the time they began to get their service act back together (with the help – yes – of PSR), it won’t be too late; they are still in the game.  But the lost year combined with a general policy of holding the line on price meant that a stair step or two of share was lost.  The added volumes last year (’18) came in the form of trailers – not un-coincidentally the worst-performing subset this year; had the rails been able to offer more domestic container capacity and reliability in 2018 they would have been ahead of the game.  Some think the rail management decision-making comes from short-termism and too much focus on the Operating Ratio (OR) – I am sure that played a role.  Looking ahead, balancing out the aberrations (trade & tariffs, ELDs, etc) as PSR plays out across the industry, we can start to think of a restoration of the upward trend line in service – and therefore, market share.  But I will always wonder what if….

The Analyst Panel with Donald Broughton, Larry Gross and myself really focused on intermodal.  Don and I debated whether or not trucking statistics have all of the believability of China’s official economic statistics – his views on truck pricing surely carry weight but the ATA’s tonnage seems to often be divorced from economic reality.  Larry noted a few points that bear reflection:

7)      Kansas City Southern CEO Pat Ottensmeyer wins the coveted Progressive Railroading 2019 Innovator of the Year Award and practically the whole team came to celebrate.  Pat went over the transitions at KCS under his leadership, with three big wins: 1) Massively improved relations with all of the Class One rails (started by his predecessor and mentor Dave Starling) 2) Build out a great team. 3) Create a culture of innovation (Pat’s baby, with his CIO Hancock) to which really should be added. 4) Become politically engaged as he was a strong leader throughout the USMCA process.  The KCS PSR process has seemingly been the smoothest of all south of the 49th parallel (Pat noted there have been no complaints to the STB) and has been driven by my other favorite phrase of the PSR process, “Service begets growth”.  Pat brought out his baseball roots by saying that the transformation of KCS was “in the 8th inning (gulp!)….of a 17 inning game!”

8)      The RailTrends Audience….This may seem to serve only as an advertisement for RT20 (November 19-20; Client informal dinner 11/18), but what we like most about or RailTrends baby is the quality of the audience and the fact that most speakers (90% of those mentioned above) graced us with their words but also their presence for the entire event.  In the audience were key suppliers and shippers as well as owners (shareholders and private equity)  and, in addition to the KCS team I so poorly photographed, top management leaders from NSC and CSX attended, 10 other short lines, one labor leader, the sole Commissioner of the ARTF (the Mexican equivalent of the STB, likely to be solely responsible for the antitrust case on 31 O/D pairs near Veracruz – note only 7 are KCSM).  In addition, three Class One CEOs not on the panel came by after the AAR Board meeting ended.  So there was lots of opportunity to chat….

9)      Dick Kloster and Integrity Rail Partners – I didn’t mention any stats from Dick’s annual session-ending rail car presentation – ask Dick or me of you would like to see this year’s version of his detailed report.  Dick did use RailTrends as an opportunity to announce his brand new, independent venture (see slide below) – Integrity Rail Partners, a research & advisory virtual firm to which I am honored to serve as an advisor.  Stay tuned….

Previous
HNY Catchup on the Rail World
Next
Questions for RailTrends PLUS....