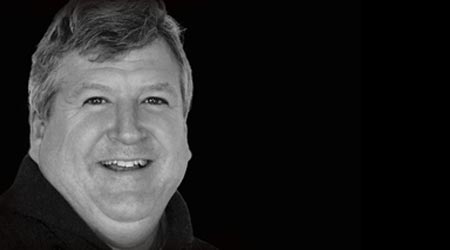 /Delta bluesman “Mississippi” John Hurt – sing how we want the Delta to just ease on by….

First, on the KSU Odyssey – nothing much new to report (how’s that?) so, from my slide deck, and that will be that, or almost.  It’s official – the STB did not issue a decision by 8/16 – it said it would by 8/31 but some folks think Monday is VT Day - so KSU postponed its shareholder vote to 9/3 (10 am eastern); CP applauded.  So the STB still has the ball; the wording will still be key, the possibilities seem endless, including more public commentary by the US Big Four rails, etc.  One recent analyst report states that if CN loses out on its proposal (altogether), it might change its strategy to focus on margins (OR) and not growth – or possibly face activist pressures.  NOOOOOOOOO!  Read the (political) room!  And look to ROIC over OR!  Anyway…. 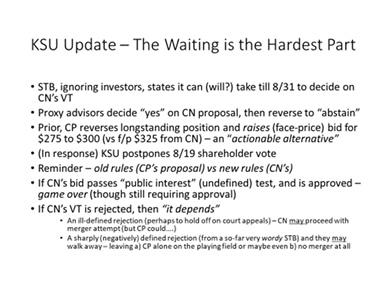 /Journal of Commerce (JoC) cover story 8/16/21 – too which my response is “Are you freakin’ NUTS?” but that’s just me, and others who see intermodal as the growth opportunity

Supply chain issues continue to garner attention (“West Coast Ports Jammed Again” – WSJ; “LA/LB issues “Red Alert” - JoC) but there was some more reassuring macro-economic news – core inflation increased only by 0.7% in July (m/m); less positive was the retail sales figure, down 1.1%.  Volumes are slowing down only on a comps basis (LA/LB up 4% in July – but Charlestown/Savanah show that if you hit it far enough, outfield walls or 2020 comparisons don’t matter – they grew 38% and 25%, respectively.  I wonder if that means the share recapture on the west coast was one-time, as some have argued, or due to the slow processing times and the 37 ships in San Pedro Bay?  The answer is meaningful for rail IM.  The director of POLA noted that it was warehousing that must be the relief valve to a truly global issue.  And it is - note – the ATA says truckload carriers lose $75B/in delay costs! And the CEO of Maersk said the ocean needed a 25% increase in capacity to handle current volumes.  IANA reports that US container imports from Asia rose 38% overall (YOY) and still 25% over 2019 (remember – a year in which the biggest issue for freight was the trade war.  Oh, simpler days!).  International TEU volume into the Midwest rose 31% and 15%, respectively.  The National Retail Federation (NRF) anticipates growth continuing this quarter led by a strong yet angsty “Back to School” season (August estimated at 15%) before turning down YOY on comparisons.  I expect to debate these and other supply chain issues at the great Intermodal Expo (Homepage | Intermodal Expo ) 9/12-14 in Long Beach itself.

The rails had some intelligent pushback in their responses to the STB comments, particularly on demurrage, and request, particularly BNSF and CSX:

The debate is – is this the same old rails or (shudder) is this time really different?  Can rails pivot to growth and provide service in an increasingly service-focused world?  Freedom Focus Reports out of Cleveland (your guess is as good as….) puts rail revenue growth at a ~5% CAGR through 2025, but others, including some folks I respect, think it is “illusory”, noting that the Canadian “pivot” was really all about BC port share gains.  My counter is that Prince Rupert doesn’t work without CN (etc) and that even superior service doesn’t create growth (rails cannot stimulate imports, but help decide where they enter the continent, in this example), just create growth opportunities.

One recent interesting example:  Service Issues/PSR – the Problem of Long Trains on High Grades, Dept:  I received the following observations over the transom, from a rail ops/fan web-thread, blaming PSR (“pretty much all of this you could attribute UP's PSR binge”); it’s too granular for me to comment on, but I thought you lot might find them interesting:

Previous
RR Merger News - no, not THAT one, CSX-Pan AM!
Next
Short Update on the KSU Odyssey