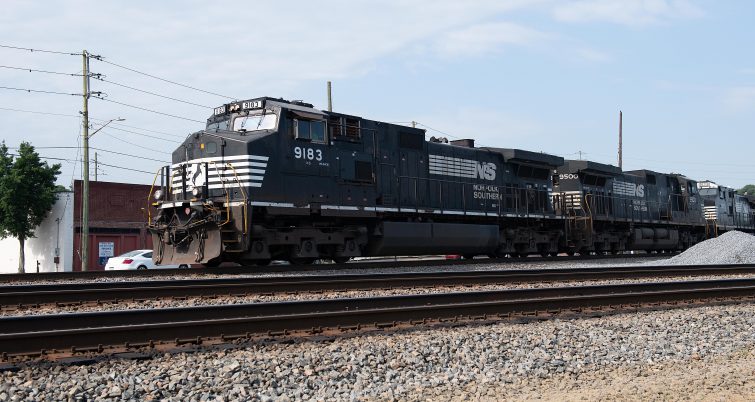 So as we all return from the beach the rail world has been active; so have and will I, having just returned from the excellent “Canada Moves by Rail” forum sponsored by the Railway Association of Canada in Ottawa. I will be off next week to the Intermodal Expo in Long Beach; the following week at the massive Railway (~10K attendees) Interchange operations convention in Minneapolis and the week after that at NEARS in….the Peoples’ Republic of Vermont. Before attempting to diagnose and analyze the recent events and pronouncements in the North American Freight World, how about a Holy Moly! Imagine my shock at opening the weekend WSJ to find a full-page (A-6!) ad by a law firm seeking shippers to initiate litigation against the rails for fuel surcharges 2003-08 (attached)! Wow….I wonder what the ROI of that expenditure will be? Also, I have hosted three distinguished railroaders in a series of calls and/or meetings, and what they had to say seriously challenged some of my conceptions of the rail world today (changing opinions noted in red)….and what further could be said on trade? The 21st C version of “ping pong diplomacy” is no friend to rails….

So – onto the discussion points, of which there are 6 of note:

1. Will Union Pacific’s cautionary volume guidance reduction set the tone for the quarter? You may recall that the Q1/19 rail earnings report theme was “reiteration” (“it was weather; we’ll make guidance”); Q2 was “capitulation” (“With 6 months - + - of weekly volume recorded we clearly will not make our January guidance”) – Q3 might be “freight recession”. That highlights both the volume struggle and the rails’ real Achilles heal – intermediate/long term market planning estimates. This can happen just as easily on the upside (BNSF 2014; CNI 2017, etc). UNP cited weak volume (Q3 down 7% YTD!), with coal down 17% (see below) and “Premium” (in this case intermodal) still down ~10%. Most operational targets (KPIs) are being improved (although velocity is still an issue. However, UNO still reiterated OR targets, pricing goals, and ~$500mm in productivity improvements for 2019. The message is that PSR is working at UNP but the volumes are not (yet) contributing….One thing to remember is that rails operate better in low volume environments, a simple fact that I had hoped over time and given the enormous 21st C CAPEX, wouldn’t be so pronounced (but I have – yet – to be proven correct on this). UNP reiterated their collaborative/deliberative approach (to the chagrin of some but hardly foolish given the anxiousness of the STB to “get involved”. UNP also reiterated their CAPEX policy, about which I am less enthusiastic….

2. One question is why is the volume so weak? The five buckets I have been ascribing to the problem are coming more into focus; in ascending estimated order of importance: the economy (note recent jobs and manufacturing numbers; earnings warnings from Home Depot, Deere, etc); the (related) trade weakness and irrational dispute; truck over-capacity; weather (the lingering impacts of flooding on systems – and Ag); PSR (both voluntary and involuntary traffic cuts).

3. The shortline boom continues! Recent deals – with more to come:

5. Shareholder news: Much has been made of the Business Roundtable’s decision to “downgrade” shareholder value from the to one of the drivers of executive performance (the rest being stakeholders and the environment). This seems to fit the rail old-timers view that PSR was somehow destructive (the recent “Railway Age” editorial cited shareholder value not as over-emphasized but actually as a bad thing!). Belying the hullabaloo, as the WSJ points out, is the unchanged compensation plans – tied to SV, or components. It is worth noting that the Council of Institutional Investors instantly came out strongly against the move, and The Economist said such measures provide no measurable accountability for CEOs – and is, in fact, a “threat to long term prosperity”!

7. Recent contacts and meetings: In the last few weeks I have not only attended RAC (“Canada Moves by Rail” see CP slides attached; CN provided a similar excellent overview – and passed around a “Canapux”!)- but I also hosted a series of calls with existing or recently retired rail executives to give their inside-baseball opinions on the state of rail and the state of PSR transformation – one thing that was transformed by these meetings was some of my long-held opinions on topics such as rail pricing strategies – the opinions are not mine, but I will indicate where they have caused at least a re-think in my own: