Here is a different twist to the question: Do you think the uptick in domestic intermodal volumes is here to stay? (Jim Blaze)

Jim Blaze - Railroad Economist
Oct 1, 2020
As an economist with an engineering background, I tend to focus on the longer-term horizon for such questions. Both Tony Hatch and Larry Gross may be correct in their respective intermodal assessments already posted to Commtrex members. My outlook is tempered less by the restocking current market demand — adding to the forthcoming holiday stocking surge. I’m concerned by the longer running legs of a marathon when one considers two intermodal challenges.
1.  One challenge is the question of eventually replenishing the TTX car fleet as and if the growth spurt continues — as identified by both colleagues.
Is utilization up by that much?
Where’s the published evidence?
2.  The second issue is one of the domestic 53-ft length container fleet.  At some point, someone has to purchase more “domestic containers”.
So for the intermodal marathon run out towards late 2021 and into 2023-2025, my “marker” outlook is scanning for a CAPEX signal ... offset by some evidence of better operating use train set cycles.
And for domestic, the third challenge still has to be finding a means to profitably expand into the under 300-mile distance corridors. Why? Because that’s where the highway congestion is so prevalent.
For rail intermodal to be a more relevant national asset, its got to up its short-haul “game”.
As this US DOT just released map shows, the traffic base for rail growth lies in serving the mass of manufacturing O/D locations east of the Mississippi River and north of Florida. 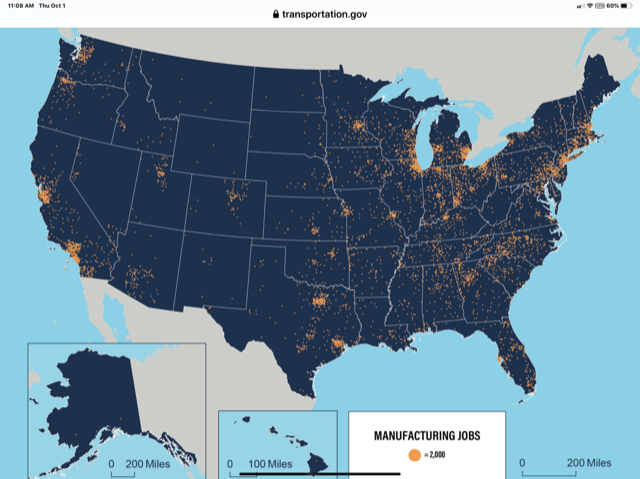 Like a Christmas Tree, this one graphic lights up our nation’s Critical Mass of short-haul opportunities amidst congested highways. To execute, that might require a better and faster upload and offload mechanical engineering TOFC car design. Expecting the mass of Highway moving semi-trailers to convert stackable containers isn’t “moving the mode share needle.”
As I said, I’m partly thinking like an engineer. These engineering things don’t evolve and commercially mature as fast as markets often shift.  If we could re-engineer the terminal process by integrating it into an improved TOFC car design (at a reasonable manufacturing cost), I believe that intermodal rail would have “its next winner.”
I believe that propositions and evidence in this Railway Age story are consistent with the shorter “offered” answer above.
Do you agree? Or not?
Contrary opinions spice up the conversation. Don’t be shy.
Cheers!
Jim Blaze
Previous
Rally for Rail (Michele Malski)
Next
DOT’S National Freight Plan.