There are many specific reasons why a fleet would experience an oversupply situation resulting in the need to store cars. However, all reasons will fall into a few main categories.

1. Market Demand.
Weak demand for the products moved by the fleet will decrease car demand, lower fleet utilization, and idle a portion of the fleet. Higher utilization is preferred by car owners because it results in revenue. If the poor demand outlook is seen to be relatively temporary, the car owner will store the car. If not, they may contemplate retiring and scrapping the car.

2. Technology.
Rail cars are long-lived assets, and technology changes slowly. When a shipper discovers that a different car type can move their product more efficiently or less expensively, they will ultimately decide to upgrade their fleet, obsoleting the existing cars they had been using. Across an entire fleet segment, this obsolescence trend picks up steam due to the increased competition from a younger, more advanced fleet. A good example of this is the advent of 286k GRL (Gross Rail Load) cars which have been replacing 263k GRL. In this situation, an oversupply of older, less desirable cars developed as a result of new car builds outpacing retirements. Retirements reduce the car supply since the cars are scrapped, but this is not the same thing as storing cars for possible later use. Retirement is permanent, whereas storage is temporary. When a new car is built, there is seldom an exact corresponding car that will be retired. The new car will replace the old car, but the old car (likely owned by someone else) remains. The old car doesn’t necessarily have an immediate use, which means it will be put into storage until a new user can be found. This process may take a while. Another example of a surplus caused by new car builds outpacing retirements is a fleet with new car orders that were placed speculatively. However, by the time the new cars are delivered, some old cars may not have been placed by the lessor. This situation may have developed because of a market downturn or because too many new cars of a type are being added to the fleet, and too fast. Regardless, these cars will need to be stored until they have a home. 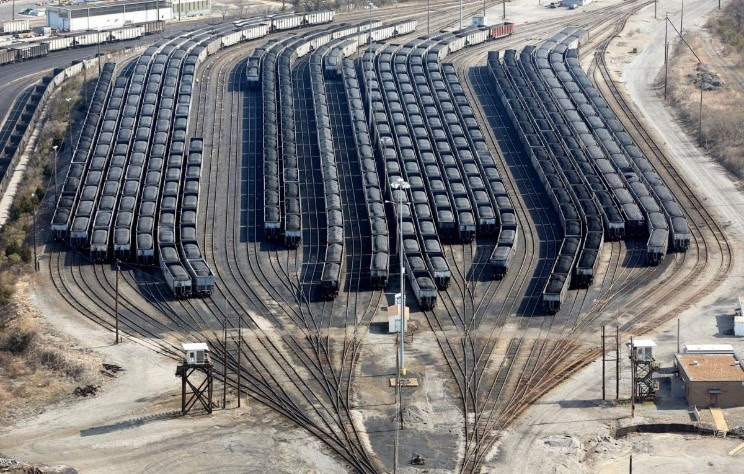 3. Regulatory Changes.
Regulatory changes come about slowly but can have big impacts when they do. An example of a storage market created by regulatory changes is a large number of relatively young coal cars that have been idled due to the shift away from using coal for electricity generation. This may have been caused by both low natural gas costs and more stringent federal and state clean air regulations.

4. Combined Factors.
Sometimes market demand, technology, and regulatory changes all combine to create a new railcar storage market. An example of this involves frac sand-covered hoppers and tank cars for crude and ethanol. In the past, new fracking technology created the need for new fleets to move inbound frac sand and outbound crude oil. New gasoline blending regulations created the need for a new fleet of ethanol tank cars. However, recently enacted regulations affecting the shipment of flammable liquids have obsoleted certain types of tank cars that were initially built in the 2000s for ethanol and in the 2010s for crude. Also, a large fleet of new frac sand-covered hoppers was initially built to move huge amounts of frac sand long-haul. Despite all of this, the development of local frac sand sources has cut the need for rail shipments dramatically. The net result is that tens of thousands of these types of cars now sit idle in long-term storage.

The bottom line is that there are a variety of rail car storage markets, some that have existed for a long time and others that are relatively new. But each has its own specific set of drivers and requirements.

Access The Storage Marketplace
Previous
Lesson 2: What To Consider Before Moving Railcars Into Storage
Next
Commentary: What are best practices for private railcar storage?