In 1996, Kansas City Southern (KCS), in a joint venture with the Mexican conglomerate Transportacion Maritima Mexicana (TMM), bought the Northeast Railroad concession that linked Mexico City, Monterrey, the Pacific port at Lázaro Cárdenas, and the border crossing at Laredo. The company was initially called Transportación Ferroviaria Mexicana (TFM) but was renamed Kansas City Southern de México (KCSM) in 2005 when KCS bought out TMM's interests. KCS's systems in the United States and Mexico jointly form an end-to-end rail system linking the heartlands of Mexico and the United States.

The Northwest Railroad concession, connecting Mexico City and Guadalajara with the Pacific port of Manzanillo and various crossings along the United States border, was sold to a joint venture between Grupo Mexico and Union Pacific Railroad. The company operates as Ferrocarril Mexicano or Ferromex.

Ferromex has invested heavily in two major intermodal terminals, Guanajuato (to serve the central México region) and Monterrey (to compete with KCSM in the northeast region market).

There were two southern concessions, merged in 2000 to form Ferrosur. Ferrosur operates the line between Mexico City and the Gulf of Mexico port of Veracruz. In 2005, Ferrosur was bought by Ferromex's parent company.

Private transload and cross-dock terminals have flourished along this railroad network, combining the efficiencies of the different transport modes. They operate under permits granted by the Mexican government, although several companies wrongfully offer services even without having the needed permits. While must of the Mexican railroad infrastructure dates back to the nineteenth century (certainly now upgraded by the concessions holders), many of these terminals are new, modern, and have comparable capabilities to the ones providing services in our northern neighbor countries. 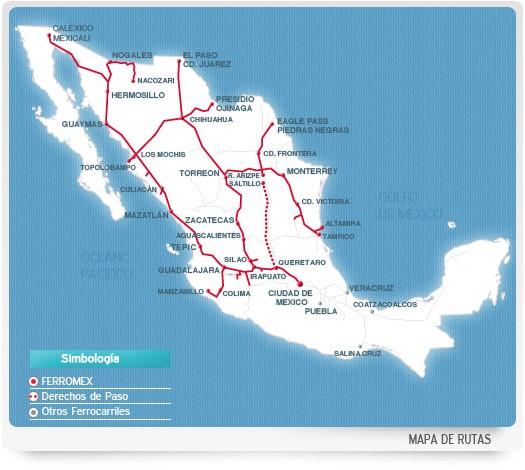 Previous
Lesson 1: Introduction to Mexico's Railroad System (Part 1)
Next
Will the USMCA be more beneficial than NAFTA for rail traffic and commerce between the US and Mexico? (Tony Hatch)