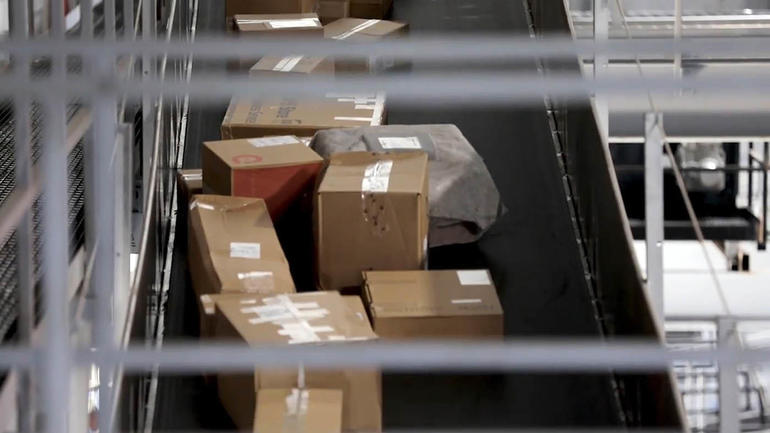 Ever wonder what happens to your UPS package in transit? Hint: It requires a lot of tech.

We're all familiar with online ordering and quick shipping. To the average person, the process seems fairly simple: Boxes, trucks, and drivers. But behind the scenes, the shipping giant UPS is a well-oiled machine made up of layers of emerging technologies implemented to meet the demands of e-commerce now and in the future.

Prior to the 2019 holiday season, UPS granted TechRepublic exclusive access inside its headquarters in Atlanta and the air hub Worldport in Louisville, KY. In light of the novel coronavirus pandemic, there are more eyes than ever on the global supply chain and worker safety as logistics companies and postal agencies work to provide essential delivery services.

In part one of this five-part series about UPS, TechRepublic's Karen Roby examines how the company's digital transformation, which entails big data, artificial intelligence (AI), virtual reality (VR), and the Internet of Things (IoT), has no end point.

How UPS uses emerging tech in the supply chain

The intersection of humans and automation can be seen throughout the building. Driverless tugs move loads from one end of the building to another as automatic feeders take cues from the Network Planning Tools to determine which packages will go down which chute.

UPS's story of digital transformation started as far back as the 1980s, when the first handheld device was introduced to drivers. CIO, Juan Perez, said there really is no end point for the company's transformation.

"IT and business today are just one. It's the way it's got to be if you want to be successful in the future," he said.

Digital transformation expert and analyst Brian Solis said every company is a technology company now. "The evolution into digital or technology companies isn't new, but it is profound, and it requires more than a modernization and digitization strategy." He added, "Technology is either a differentiator and value-added experience, or it is a commodity."

As the needs of the business change, it's UPS's Advanced Technology Group that's tasked with creating what's next for the company. Bala Ganesh is the vice president of the group.

"Some of the new technology will work, and some won't, but we're putting our chips on the table and starting to see some returns," Ganesh said.

The FAA gave UPS the first full approval for a drone airline, which means UPS has the right to operate as many drones as it wants.The unmanned flying vehicles are making waves on medical campuses and will no doubt play a bigger role down the road.

"Three things needed to come together for drones: The customer needs, the readiness of the technology, and regulatory approvals," Ganesh said.

IoT devices are another technology being used throughout the UPS network. More than 100,000 Smart Trailer devices are attached to company assets, producing up to 60 million GPS messages every week. The ability to track company property so effectively results in cost and time savings. Comparing GPS messages to the company's legacy system allows for last-minute route and load changes.

Inside the command center at the UPS hub in Atlanta, employees resemble air traffic controllers of sorts. As they carefully consider external factors like weather and traffic, millions of packages are brought in and prepped for sorting.

Rob Papetti, the force behind the company's Network Planning Tools, noted how different things are from the past. "Before automation, we didn't have the opportunity to make changes, granular changes to the network."

Network Planning Tools (NPTs) are the company's big data solution that gives a bird's-eye view of the volume in the network and the peaks and valleys that are expected.

"Whether it's on a train, in a trailer, whether it's moving in an aircraft, we know what is moving throughout the network. We layer on top of that data the artificial intelligence and the operations research algorithms to determine how to best optimize it," Papetti said.

As the control center looks to distribute the loads, the workers inside the UPS hub keep the flow moving. A dizzying maze of conveyor belts, chutes, scanners, and other high-tech equipment fills the 1.2 million-square-foot facility. Cameras scan each package from multiple sides after it's loaded.

Technology touches every corner of the business, including the training department. Extensive programs involving virtual reality are being used to teach employees, in a safe environment, how to better do their job. Whether it's the drivers crisscrossing neighborhoods every day or the workers inside the hub, augmented reality (AR) and VR are changing the training game.

Looking to the future, Perez said the power of big data excites him the most. He added, "Supply chains will have to be more nimble and react even quicker, and it's data that will make that possible."

While decisions are being made in Atlanta about the future of UPS, the company's fleet of airplanes hums along about 400 miles away at Worldport in Louisville, KY.

Worldport is practically a city in itself. The airport sees 251 heavy jets and another 300 small feeder aircraft fly in and out of UPS's airport every day. While UPS planes take off and land at a mind-boggling cadence, millions of packages are processed inside the hub. It's considered the largest automated sorting facility in the world.

The results of automation are evident throughout the building. Jim Mayer, public relations manager for the UPS airline, said the facility operates in two shifts.

"About 800,000 packages are sorted during the day and about 1.2 million at night. The week before Christmas, that 2 million doubles to more than 4 million," Mayer said.

The wheels on the floor of the sorting hub guide containers throughout the day and night to conveyor belts where the packages are sorted by the information contained on smart labels. Because of technology, things are very different now at Worldport.

"Years ago, our sorting was entirely manual, so employees had to memorize hundreds of zip codes," Mayer said. "Now, it's automated: Packages come out of the container, they're read by the scanner, and then sorted through 155 miles of conveyor belts."

Logistics is on the verge of a tech revolution

Technology moves at a rapid pace, and the logistics industry is in the midst of a technological revolution. More and more tools are being introduced to automate every facet of the supply chain. But the ability to balance what is hype, what is real, and what will sustain a company for years to come is a challenge.

Perez believes the company is positioned well for the future. "I don't think our digital transformation is ever really going to end. The solutions that we're building today are supporting the business today, but they're also being built to support the needs of the future."