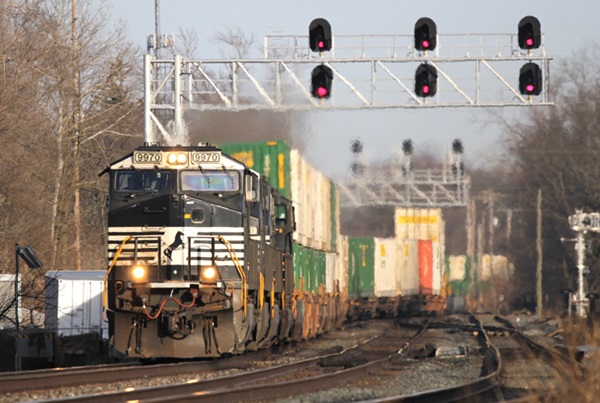 Railroads should brace for sharp traffic and revenue declines this year as the coronavirus pandemic plunges the global economy into recession, economists and analysts say.

The big question is how deep the recession will be and how long it will last. “There’s a lot of uncertainty … a lot of guesswork still going on,” Canadian Pacific CEO Keith Creel told investors this week, adding that it was unclear whether the economic disruption caused by the pandemic will last two months, three months, six months – or even longer.

Highlighting the uncertainty, forecasts for U.S. economic output in the second quarter ranged from declines of 3% to 30%, according to a March 23 survey of 14 Wall Street firms. Most of the job losses and economic damage was expected to be in the service sector, including restaurants, retail, and tourism-related industries.

But that is expected to translate into significant reductions in rail traffic as consumer spending drops and industrial production slows.

“Carload volumes are likely to move much weaker in the coming months than initially expected as the carload sector deals with headwinds in almost every major commodity sector. The previous expectation was for flat to slightly weaker volumes in 2020 and that is now likely to be down 8% to 10% from 2019’s low levels,” says Todd Tranausky, a rail and intermodal analyst at FTR Transportation Intelligence, a freight forecasting firm.

The outlook for intermodal isn’t much better, with FTR now projecting a decline of between 6% and 8%.

Global container traffic could fall 10% this year, says Lars Jensen, a maritime trade expert who is CEO of SeaIntelligence Consulting. International intermodal volumes were the first to feel the impact of coronavirus as Chinese exports all but dried up in February amid quarantines in China.

“We are already 12% down year-over-year, so maybe another 12% downward leg is reasonable and perhaps that is the optimistic case,” intermodal analyst Larry Gross says. “The key question is how long our shutdown lasts.”

International intermodal volume may get a boost in the next few weeks as shipments from China arrive at North American ports, Gross says.

Railroads could cushion the blow of domestic intermodal declines by using pricing to gain volume from the highway. “In recessionary times, folks are more willing than ever to compromise to save a buck,” Gross says. “With operating ratios in the 60’s, the rails have plenty of room to lower price if they choose to. While previously the hands of the pricing managers may have been handcuffed by the organizations’ unwillingness to compromise operating ratio due to the fear of affecting the stock price, now that share prices have tanked and with volume ... perhaps looming larger in Wall Street’s eyes, maybe the handcuffs will come off.”

Read The Full Article
Previous
Engineer goes off the rails in alleged aim for Mercy
Next
COVID-19 demand update: Oil seen down 6.4%, jet fuel down 26%, road fuel down 5.5% in 2020