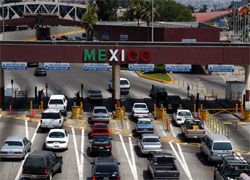 The U.S.-Mexico border will be closed to nonessential travel to further help stem the spread of the novel coronavirus, President Donald Trump announced Friday.

"As we did with Canada, we're also working with Mexico to implement new rules at our ports of entry to suspend non-essential travel," Trump said. "These new rules and procedures will not impede lawful trade and commerce." Trump said that Mexico is also suspending air travel from Europe.

Secretary of State Mike Pompeo said the U.S. has taken "two important steps" this week to curb the spread of the virus. He noted the border closure with Canada, announced Wednesday, would go into effect at midnight. He said the closure would last 30 days and reiterated the news Trump shared that the border with Mexico would also close.

"The United States and Mexico have agreed to restrict nonessential travel across our border," Pompeo said.

"Tonight, at midnight, we will execute the CDC order by immediately returning individuals arriving without documentation to Canada, Mexico, as well as a number of other countries, without delay," Wolf added.

The State Department on Thursday issued a new travel alert urging Americans not to go abroad under any circumstances and to return home if they are already abroad unless they plan to remain overseas.