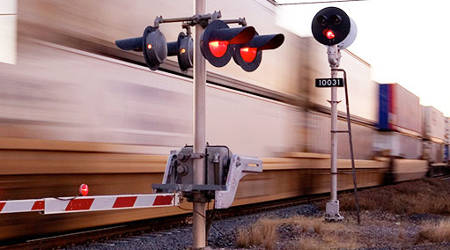 U.S. freight-rail traffic tumbled 8.6 percent to 459,966 carloads and intermodal units during the week ending March 21 compared with the same week in 2019, according to Association of American Railroads (AAR) data.

Impact of the coronavirus pandemic may be influencing rail traffic patterns, as railroads logged 224,048 carloads, down 5.4 percent, and 235,918 intermodal containers and trailers, down 11.4 percent during the week.

"Demand for rail service depends on the demand further down the chain for products railroads haul and on the ability of firms they serve to produce what is demanded," said AAR Senior Vice President John Gray in a press release.

For example, carloads of automobiles and auto parts fell considerably over the past week, as automakers have suspended manufacturing operations for the time being. Also, social distancing practices and job loss are keeping buyers out of auto showrooms. As a result, rail carloads of autos and auto parts "fell considerably this past week," Gray said.

"It wouldn't be surprising to see rail volumes of other categories soften in the weeks ahead, as steps taken to limit the spread of COVID-19 continue to impact producers, both here and abroad, particularly of consumer goods or intermediate products from which those goods are produced," said Gray.

But there is some good news: Intermodal volumes for railroads serving West Coast ports that receive the bulk of imports from China appear to have plateaued over the past four weeks — an indication that "we may have seen the worst of the COVID-19 impacts on the Asia trade," he said.

Read The Full Article
Previous
Ocean container volumes are about to fall off a cliff
Next
FRA, Responding to Industry Joint Petition, Issues Emergency Waiver