Engineer goes off the rails in alleged aim for Mercy 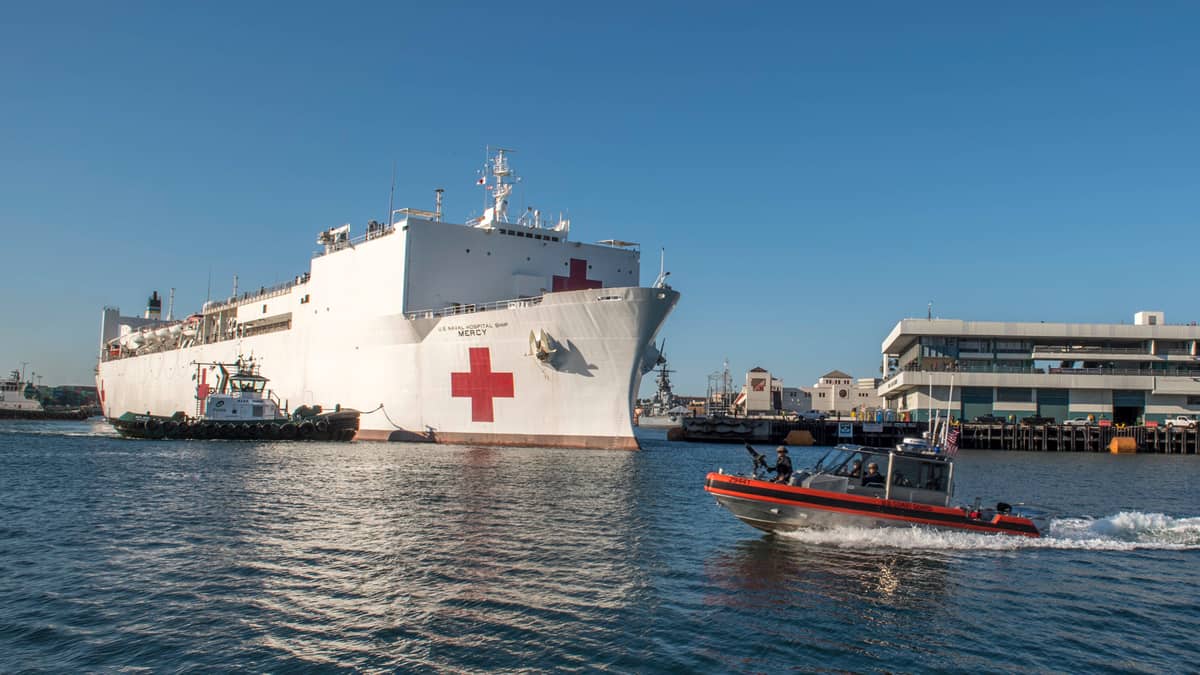 There have been plenty of action-adventure films about an anarchist bent on doing evil with a fast-moving plane, bus or submarine. In a plot that appears not to have been well thought out, a train engineer allegedly tried to do harm to the USNS Mercy at the Port of Los Angeles this week with a short line locomotive.

To reach the deck of the Navy hospital ship, the 200,000-pound-plus locomotive would have had to rocket off the tracks and go airborne like Steve McQueen’s Mustang in “Bullitt” and soar over a channel at least 120 feet wide.

The Pacific Harbor Line (PHL) engineer, Eduardo Moreno of San Pedro, California, was arrested immediately after the locomotive derailed Tuesday afternoon at the Port of LA. The federal charge of train wrecking, filed Wednesday, could land him in prison for 20 years.

The 1,000-bed USNS Mercy arrived at the port late last week to provide relief to area hospitals overburdened with COVID-19 patients. Over the weekend, the ship’s medical staff began treating patients not infected with the coronavirus.

According to the U.S. Attorney’s Office for the Central District of California, Moreno told LA port police that he believed the Mercy could be part of a government takeover.

A California Highway Patrol (CHP) officer witnessed the derailment and took Moreno into custody. According to the U.S. Attorney’s Office, Moreno told the officer, “You only get this chance once. The world is watching. I had to. People don’t know what’s going on here. Now they will.”

Phillip Sanfield, director of media relations for the Port of LA, told American Shipper that Moreno never had a chance of reaching the Mercy with a locomotive.

“First of all, there were no train tracks that went to the Mercy, so there was no way via train track that he would have gotten close,” Sanfield said. “If he went off the tracks, he would have had to have gone through a large parking area, a grassy area and then there was a channel of at least 30 to 40 yards before the Mercy. Obviously, that was not going to happen.”

PHL is a short line railroad that serves marine terminals at the ports of LA and Long Beach. It has about 190 employees.

PHL spokesman Stefan Friedman told American Shipper that the company learned early Tuesday afternoon that a “locomotive pulling a single rail car was traveling at a high rate of speed and traveled off the end of a dead-end track in the Port of Los Angeles. The engineer of the train has been arrested and charged and we are fully cooperating with all authorities as they proceed with their investigation. PHL has resumed its normal operations in the ports of Los Angeles and Long Beach.”

Friedman said Moreno has been decertified as a locomotive engineer. Engineers are required to be certified as part of Federal Railroad Administration regulations.

“Railroads have the authority to revoke the certification for prohibited conduct,” Friedman said, adding that without certification, Moreno will be unable to work as an engineer for any U.S. railroad.

Sanfield said the Port of LA did not have a cost estimate for repairs but called the damage minimal.

“There was very little damage done. He came off the rails and went through a fence essentially,” Sanfield said.

Read The Full Article
Previous
Railroads vs. coronavirus: Not just truckers! Railroaders are heroes, too!
Next
Recession triggered by virus expected to take toll on rail traffic