Coronavirus State-By-State Projections: When Will Each State Peak? 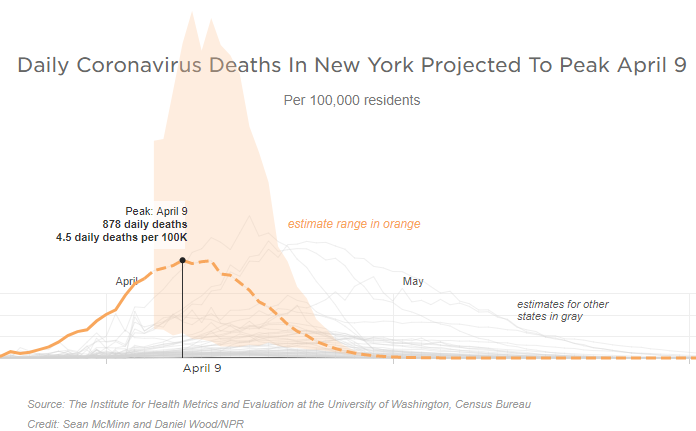 As COVID-19 surges in places throughout the country, Americans are left to wonder, "When will my state hit its worst point?"

A widely cited model offers some predictions. The Institute for Health Metrics and Evaluation's COVID-19 projections were cited in recent White House briefings and take into account how the pandemic is playing out in several countries around the world. They incorporate the current trend line of deaths in U.S. states and the estimated impact of social distancing measures to predict when each state may reach peak daily deaths and hospital usage.

While projections like these are imprecise, they're useful to policy makers and hospital leaders trying to prepare for surges. The model was designed to give hospitals an idea of how quickly and how much they need to expand capacity.

Researchers at IHME make frequent updates to the model based on newly available data, and some of those changes have resulted in drastic shifts. The latest major update, made Sunday, shows fewer people dying over a shorter period of time, the model's lead researcher Chris Murray says.

However, he cautioned that when social distancing measures lift, outbreaks could spark up again.

"If you ease up prematurely the epidemic can rebound right back to the level we are at now in a matter of weeks," Murray says. "So the potential for rebound is enormous if we let up on social distancing."

To compare states with vast differences in populations, NPR analyzed the projections by looking at deaths per 100,000 residents.

Want to see the projection for your state? Jump to our state lookup tool.

It's important to note that much uncertainty comes with modeling into the future. The national model has a massive gap between its low and high estimates for peak daily deaths: 1,300 and 7,700. But individual states have large gaps too. The model, for example, estimates New York's daily deaths could range between 200 to 2,800 at its peak.

Read The Full Article And View Graph
Previous
A case for the 'hope for the best' contingent: rail equipment market commentary by Richard Kloster
Next
Coronavirus Results in Suspended Trade Tariffs